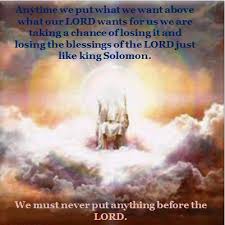 Every time I read through the Old Testament I discover new things. I believe God draws certain things to our attention at different times in our life. The Holy Spirit beautifully reveals things as we need them in our walk. I have just finished reading about David and the Kingdom God promised him that would be continued through his son Solomon, should Solomon continue to serve God and walk in obedience.  Well Solomon started off well. He rebuilt the temple as he was instructed to. However, even with his God given wisdom, he made choices along the way that would put him in opposition to God’s purposes. He began to collect women as his wives and concubines that served idols and false gods. Sure enough over time he too began to serve the same idols. He, who had heard from God twice in his life and had seen God’s hand move mightily through his father David!  He compromised with the company he kept and it eventually caused him to compromise his obedience to the Most High.

For some reason, this time around as I read through the story it made me very sad. God had done so much for Solomon. He had revealed Himself in so many awesome ways and yet Solomon, through the lusts  of the flesh, turned from serving Him.

1Kings 11:1-13 NIV11 King Solomon, however, loved many foreign women besides Pharaoh’s daughter—Moabites, Ammonites, Edomites, Sidonians and Hittites. 2 They were from nations about which the Lord had told the Israelites, “You must not intermarry with them, because they will surely turn your hearts after their gods.” Nevertheless, Solomon held fast to them in love. 3 He had seven hundred wives of royal birth and three hundred concubines, and his wives led him astray. 4 As Solomon grew old, his wives turned his heart after other gods, and his heart was not fully devoted to the Lord his God, as the heart of David his father had been. 5 He followed Ashtoreth the goddess of the Sidonians, and Molek the detestable god of the Ammonites. 6 So Solomon did evil in the eyes of the Lord; he did not follow the Lord completely, as David his father had done.

9 The Lord became angry with Solomon because his heart had turned away from the Lord, the God of Israel, who had appeared to him twice. 10 Although he had forbidden Solomon to follow other gods, Solomon did not keep the Lord’s command. 11 So the Lord said to Solomon, “Since this is your attitude and you have not kept my covenant and my decrees, which I commanded you, I will most certainly tear the kingdom away from you and give it to one of your subordinates. 12 Nevertheless, for the sake of David your father, I will not do it during your lifetime. I will tear it out of the hand of your son. 13 Yet I will not tear the whole kingdom from him, but will give him one tribe for the sake of David my servant and for the sake of Jerusalem, which I have chosen.”

As I thought about this, it just seemed so ridiculous for Solomon to give up the One true God for idols after all he had seen and experienced and then it occurred to me, how often do we in the body of Christ do the same thing?  We compromise in our relationships to appease our lusts and then find ourselves sliding down that slippery slope of separation from our intimacy with Christ.  How it must grieve God’s heart when He sees us setting aside our fellowship with Christ for people and things that will never amount to anything outside His approval. How many Christians do we know that have “intermarried” their lives with those who do not follow Christ and then are surprised when they find themselves living out the difficult consequences of their decision?  Sadly too many.

The beauty in this story however, can be found in verses 12 and 13, 12 Nevertheless, for the sake of David your father, I will not do it during your lifetime. I will tear it out of the hand of your son. 13 Yet I will not tear the whole kingdom from him, but will give him one tribe for the sake of David my servant and for the sake of Jerusalem, which I have chosen.”  Though people may turn from serving God, He will never go back on His word. Because of the sake of David, God continued His promise through one tribe! That is the heart of our Father. He loves us and throughout history has always provided a way for His people to continue. The greatest way being through His precious Son!

My prayer is to have a heart like David.  Acts 13:22 NIV 22 After removing Saul, he made David their king. God testified concerning him: ‘I have found David son of Jesse, a man after my own heart; he will do everything I want him to do.’  Though I may stumble from time to time, I will continue to come before my beautiful King daily and ask for His mercy and guidance.

Lord let us not “intermarry” with the world and it’s idols but instead be a beacon of light and hope to the world that so desperately needs You! If we have Lord, please forgive us of our disobedience and hard heartedness and set us back on track. Continue the work of sharing the gospel through us Jesus!

One thought on “Solomon’s slippery slope of compromise”